Minibrix sets were manufactured by the Premo Rubber company of Petersfield, Hants. Premo was a subsidiary of the I.T.S. Rubber Company, which Arnold Levy had founded in Sandringham Road, Petersfield in 1919. 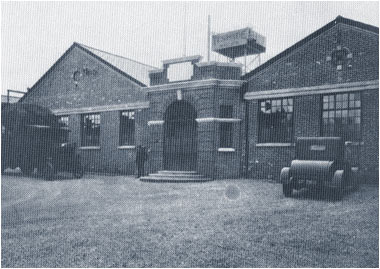 Levy was born in April 1886 in Sunderland where his father had been a leading member of the Jewish community. He went into the "leather and grindary" trade, which acted as wholesale suppliers to the shoe repair industry. His business took him to America which step had two significant consequences for him. Firstly he married an American girl, Lena and secondly he came to know of a revolutionary new style of rubber shoe heel called the "convex-concave". I.T.S. was named after the American manufacturers of this product Ingiver, Tufford and Smith and the Petersfield factory was originally set up to manufacture the heel under licence. At its peak the factory employed some 250 people making it the largest single employer in the town.

The heel was a success; the firm prospered and decided to diversify. The shoe supply side was conducted under the name of 'Itshide' whilst 'Premo' was used as the trade name for a further range of rubber goods. This included bath brushes, complexion brushes, and in-bath mats, various medical items and, most importantly for us, Minibrix.

Arnold and Lena had no children of their own but Arnold's brother Moss, who was the company secretary, had nine! Minibrix may well have been developed with these children in mind. The exact origins of the bricks are unclear. The American Erector Company had introduced fibre-interlocking bricks in the early 30's to complement their metal constructional system. More significantly the Rubber Specialties Company Incorporated of Conshohocken, Pennsylvania introduced interlocking rubber bricks called Bild-O-Brik, almost exactly similar to Minibrix, in 1934. It may well be that Arnold Levy had seen either or both of these products on one of his many trips to the United States. However, the actual design of the British bricks and the other elements of the Minibrix system is thought to have been the work of a Mr Gilbert, an ITS engineer, and patents for the product were applied for on July 5th 1935 in the names of the Premo Rubber Company and Arnold Levy.

The system consisted of small brown rubber bricks which measured 1in x 1/2in x 3/8in. From the bottom of these bricks two lugs protruded. These lugs (or "pips" as they were known to the company workers) located in holes in the top of the bricks and in this way brickwork walls could be constructed. This constructional method, later reinterpreted in plastic, has come to dominate constructional building toys right through to the present day. 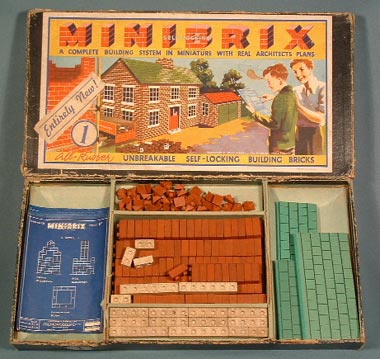 There were initially eight main outfits in the system, numbered 0 to 7, which were launched in August 1935. However, by July 1936 the 0 outfit was renamed the 'Junior' outfit and a series of four accessory outfits was introduced for building up to the larger outfits. Prices ranged from 5/- to 63/- These sets contained whole bricks, half bricks, angle bricks, lintels, thin plastic windows and doors that located in tiny holes in the bricks, and stiff card roofs. The sets were packed in flat green rectangular boxes in an attractive but labour intensive manner, the bricks in the central portion of the box being made up into house facades by the packers. The rather basic instruction manual, which contained enhanced photographs of models, was supplemented by a set of blueprints, one for each model, which gave details of the floor plan and each elevation of the finished model. These models were advertised as having been designed with the aid of a local architect, one W.R.T. Carter A.R.I.B.A.

At the back of the manual were photographs of certain 'super-models'. Amongst these were models of Hampton Court; Tower Bridge; and a skyscraper, clearly modelled on the Empire State Building, and measuring nearly four feet in height. Though the manual gave no instructions for these models, they could be obtained for 2d from your friendly dealer! By May 1936 dealers were able to purchase Service or Dealer's cabinets for £6 or £3 respectively, which contained a range of spare parts for separate sale. By this time the factory was also producing models for shop and exhibition display.

Click on any image below to see a larger version.