In the late sixties the range of sets was reduced to just three simply called No. 1, No. 2 and No. 3, which were available in 'red' or rainbow versions. They came in flat boxes and contained some of the plastic parts. But it was a sign of the slight regard with which Minibrix was now held by I.T.S. that the sets appeared with the same manuals as the previous tubed sets despite the fact that the contents differed and so most of the models could no longer be built, even with the largest set! Production gradually faded in the early 70's and was stopped altogether by 1976. I.T.S. itself continued to produce other goods up until 1987 when the factory finally closed. On the former site of the factory there is now a modern housing estate.

The demise of Minibrix is a sad, but far from unique, story to lovers of British toys. Minibrix had many advantages over its plastic rivals. Models made from it looked far more like the real thing, the interlocking system was more secure than the 'Lego' one and rubber is a far more pleasant medium to work in than plastic. But, as with so many British products that sold well in the 50’s, its manufacturer became complacent and failed to develop it. What if the factory had switched to making the bricks from neoprene? What potential had the proposed 'architects' set for advanced modelling? What about larger, easier to use bricks for your children, along the lines of Duplo? Unfortunately none of these, or any other innovative moves were made until it was too late. 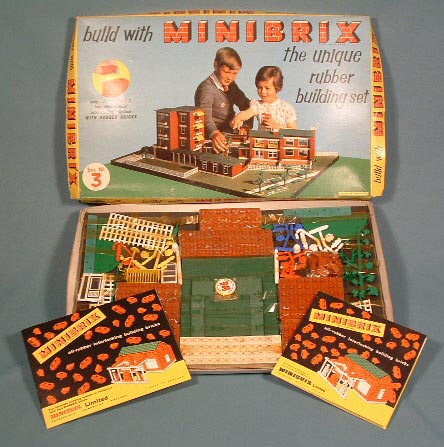 A final, sad post-script to the story of Minibrix comes from one day in the late 70's. Despite production having ceased some years earlier a large stock of bricks was still held in the Petersfield factory simply taking up space. On this fateful day it was decided to load all the remaining stock in a skip, which then dumped its load in the local tip. At the same time the metal moulds in which the bricks were made were sold to the local scrap merchant.